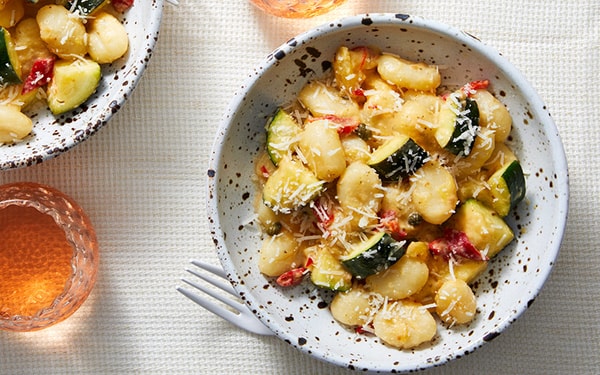 Directions
In a medium non-stick pan, heat 2 teaspoons of olive oil on medium-high until hot. Add the zucchini in an even layer and cook, without stirring, for 2 to 3 minutes or until lightly browned. Add the capers, and garlic; season with salt and pepper. Cook, stirring frequently 30 seconds to 1 minute or until lightly browned. Add the peppers, tomatoes, oregano and as much of the red pepper flakes as you would like depending on how spicy you’d like the dish to be. Season with salt and pepper. Cook, stirring occasionally, 4 to 6 minutes or until slightly thickened. Turn off the heat. Next, cook the gnocchi according to the packing instructions or until the gnocchi float to the top of the pot. Drain the gnocchi and add to your sauce. Add cream and cook on medium-high heat, stirring frequently 1 to 2 minutes or until coated. Turn of the heat; season with salt and pepper to taste. Serve the finished gnocchi, garnished with grated cheese. Serves 2.